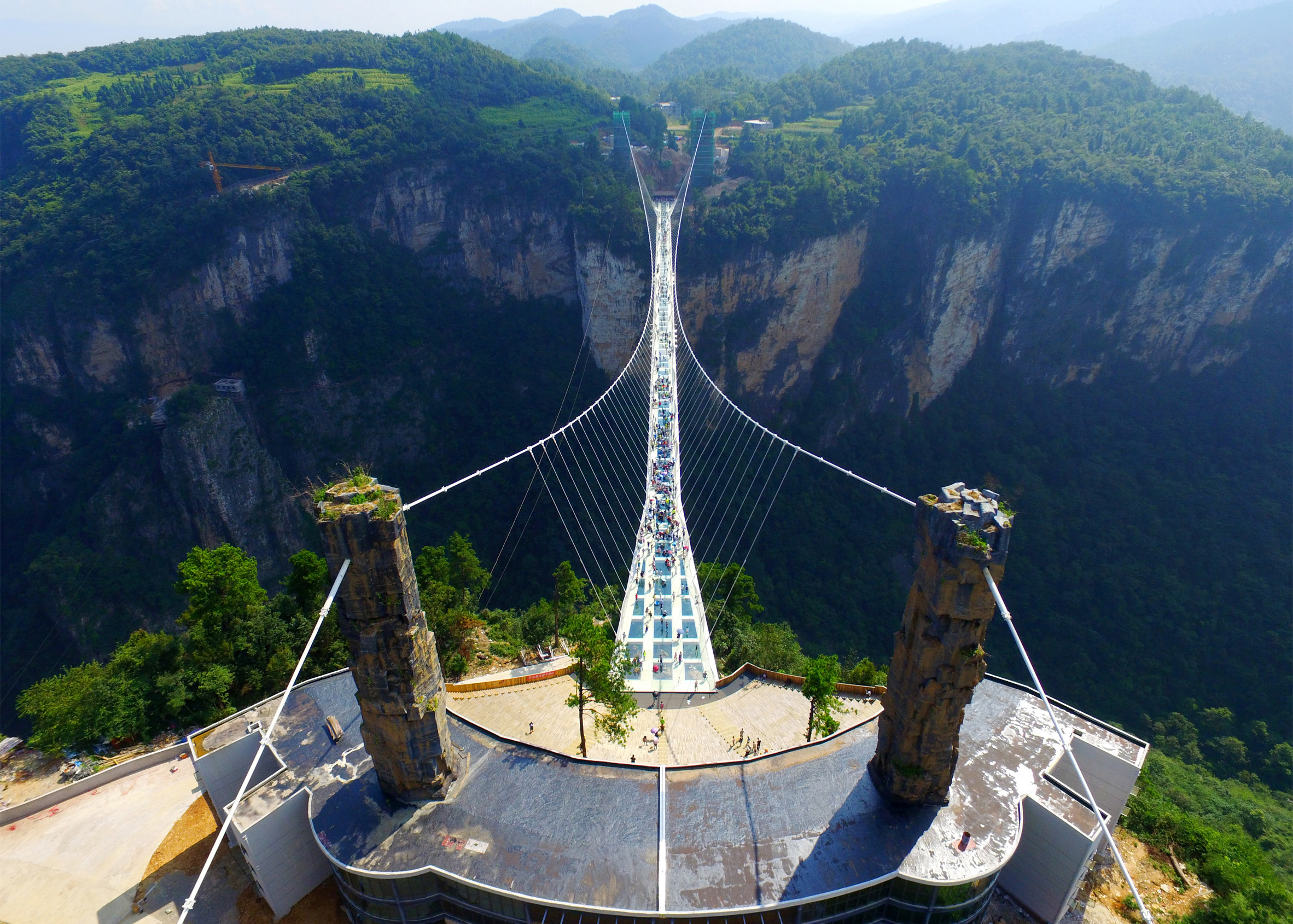 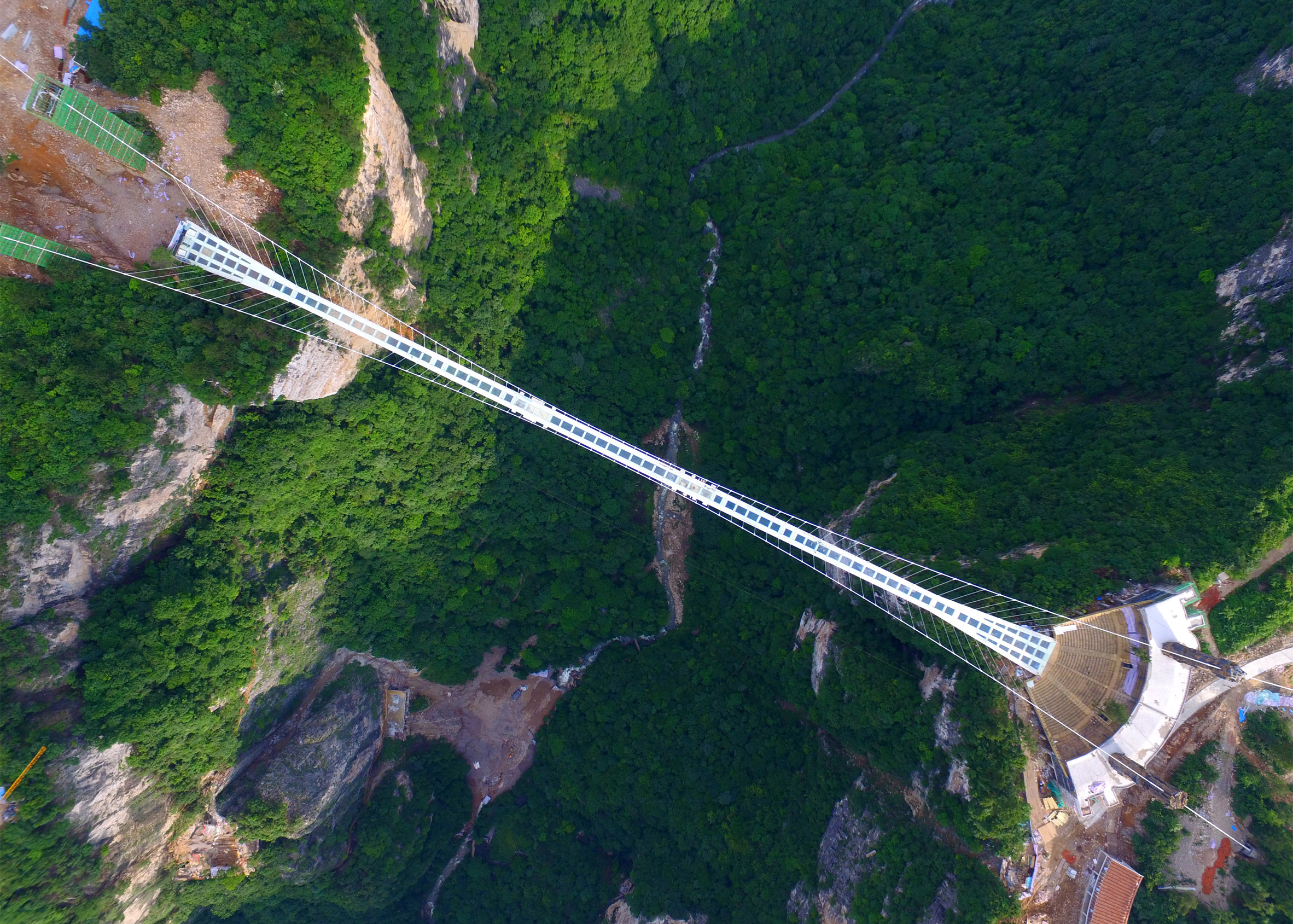 A 430-metre-long glass bridge has been constructed across a deep canyon in China’s Zhangjiajie National Forest Park (+ slideshow).

Designed by architect Haim Dotan, the Zhangjiajie Grand Canyon Glass Bridge is believed to be the world’s longest and tallest glass pedestrian bridge.

Glass panels are set into its walkway, giving visitors vertigo-inducing views and photo opportunities of the canyon below. 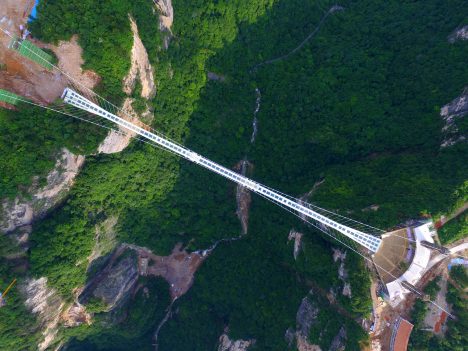 “The Zhangjiajie Glass Bridge was designed to be as invisible as possible – a white bridge disappearing into the clouds,” said Dotan. 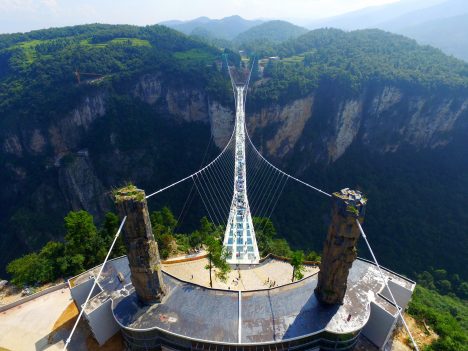 “As the designer of this bridge located in an incredible and magical national park, I believe in nature, harmony, balance and beauty,” he added. “Nature is beautiful as is. One wants to make the least impact upon it.”

The bridge rests on the edge of two cliffs and is suspended 300 metres above the ground by stay cables.

Wavy slatted handrails line edges of the glazed walkway, which narrows towards the centre of the canyon to create an exaggerated perspective. 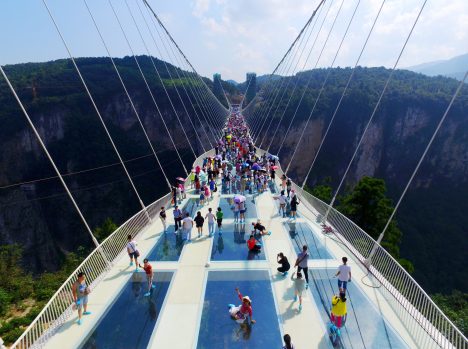 The bridge is capable of holding up to 800 people at any one time and has already been used as the launch point for the world’s highest bungee jump, said the architect.

Already a hugely popular tourist attraction, the bridge will also serve as a venue for private events, including as a runway for fashion shows.

“It will create an experience of being in pure nature while suspended in mid-air, between heaven and earth, like a bird with its wings open wide,” said the architect. “I called it Bridge of Courageous Hearts.” 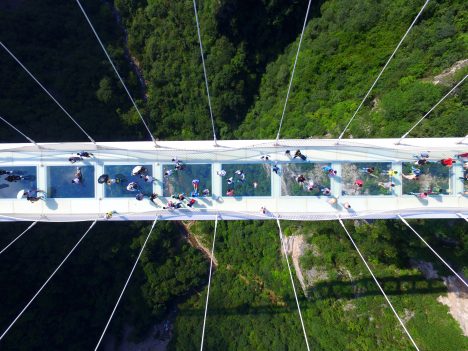 Haim Dotan, who set up his Tel Aviv practice in 1990, is the latest in a string of architects and designers incorporating glass into the bases of bridging structures.

Lately, there have been plans for several glass-bottomed swimming pools –one in London linking two residential towers and another in India’s Gujarat state.

Tickets to access the glass bridge cost £16, in addition to the £13.50 charge to visit the Zhangjiajie Grand Canyon Scenic Area, which is located in China’s Hunan Province.

All images are copyright Getty Images and used with permission.