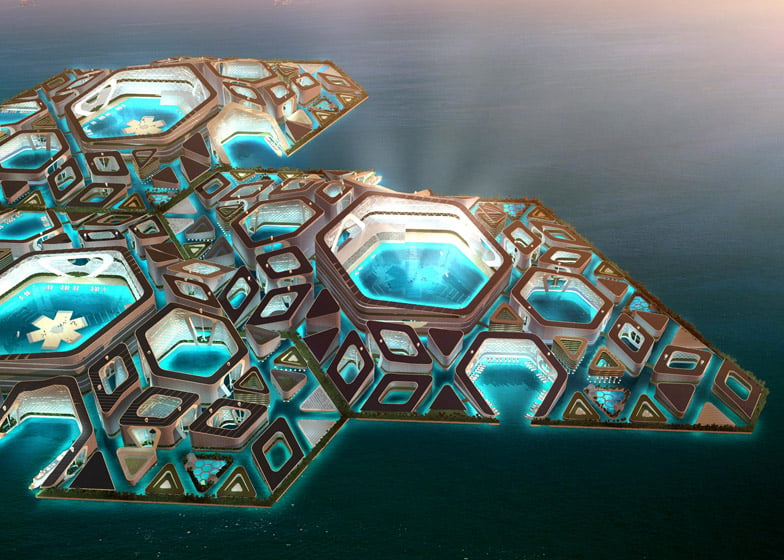 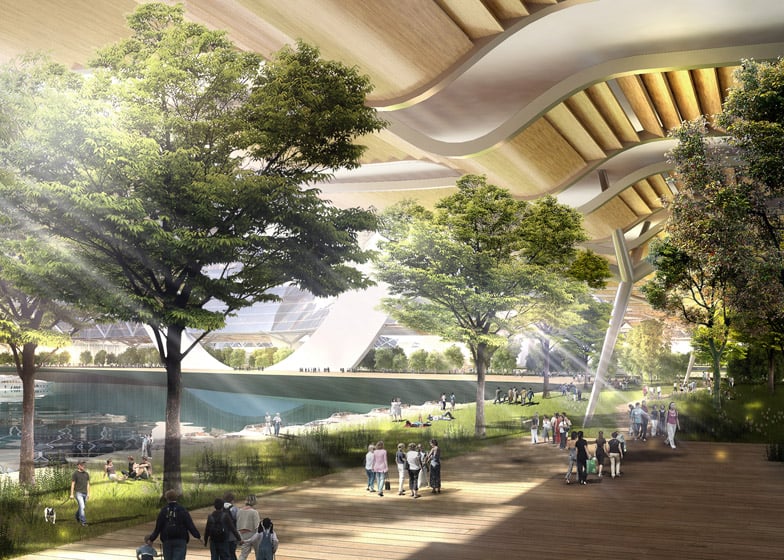 Cities that float on water could offer an alternative to destroying the earth’s valuable countryside according to architecture studio AT Design Office, who has developed a concept for an ocean metropolis (+ slideshow). 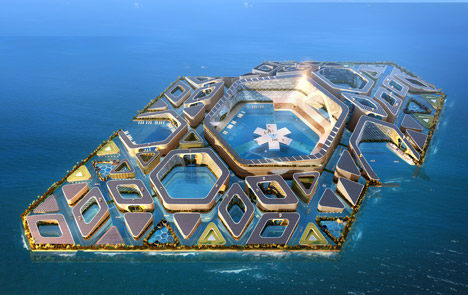 AT Design Office, who has offices in England and China, was commissioned by Chinese construction firm CCCC-FHDI to design a floating island with an area of four square miles – utilising the same technologies that CCCC-FHDI is using to build a 31-mile bridge between the cities of Hong Kong, Macau and Zhuhai. “Part of that bridge is an underwater tunnel, which is joined by a 150-metre-long precast concrete box,” explained architect Slavomir Siska.

“The mega box is cast on a nearby island and floated to site before being connected. We were appointed to work with the engineer to come up with a masterplan for a 10-square-kilometre floating island that can be built with the same technology,” he said.

Entitled Floating City, the team’s proposal involves a series of prefabricated hexagonal modules that tesselate to create all the infrastructure needed for a city on water – from a transport network of yachts and submarines, to a floating hotel and entertainment complex.

Recreational green spaces would be located both above and below the water’s surface, while farms, hatcheries and rubbish collection facilities would allow the community to produce its own food and sustainably dispose of waste.

“The project offered an opportunity to develop a new urban nucleus of world-class residential, commercial and cultural facilities, as well as to promote a zero-carbon, energy-efficient and self-sufficient city,” said Siska.

The modules used to construct the island would be prefabricated in a factory then floated out to a site. A cruise dock would be an integral feature of the city, allowing these new deliveries to be easily received.

A system of underground tunnels would also be included, creating a network of roads and walkways between buildings and islands.

The proposal is now being reviewed by one of China’s largest property investors. “China Transport Investment Co is reviewing the proposal and is likely to start to test this ambitious project from a smaller scale next year,” said Siska.

Here’s a more detailed description of the proposal from AT Design Office:

AT Design Office release design for the Floating City

Our existing landmass on earth has been built up so extensively that the remaining free land is under extreme pressure and needs to be preserved as much as possible. New settlements should be planned in such a manner that important social and environmental conditions are improved and can provide for better 21st century living. Environmental impact and the improvements of health and social conditions for human habitat should be the main concerns of new urban design and development. Environmentally adaptive measures, higher densities, mixed uses and efficient, smart design and infrastructure strategies need to be considered.

     
The basic construction unit is a prefabricated block – 150 metres length and and 30 metres in section. On plan, the grid can be an equilateral triangle and a pentagon. The prefabricated parts can be overlapped vertically. During construction, the modular parts are floated to the site after pre-fabrication in the factory.

The floating city has a perfect internal and external traffic system, linking it within but also with the outside world. A cruise dock serves giant ships, a yacht dock serves private vessels and civilian submarine traffic. Submarines and electric vehicles are the main means of transport on the island – keeping the island free from air pollution and congestion caused by automobiles. The main traffic flows are facilitated via the water canals above and below the water surface. The peri-urban area house farm, hatchery and garbage recycling centre.

   There are two public green belts ‐ one on the water surface and one under water. The upper one can provide public space usable for sports and recreation in a fresh air environment. The underwater green can be used for recreational tours.

   Vertical gardens are interconnected with the public greenery system above and below the water. A chimney in the centre of the vertical garden provides natural ventilation and lighting to the underwater city. Meanwhile the vertical garden is also a public traffic hub, which provides a traffic platform for submarines and inter-block passages.

   All living spaces in the floating city have ocean scenery in all directions, and with convenient traffic connections within its 150-metre radius, enjoying proximity to local facilities, services, public transport and gardens. A club located at the top of each block and an equipment room and gravity regulation system located at the bottom.

   Underwater tunnels with walkways and roads permit horizontal communication and access between the islands and buildings that comprise the floating city.

The peripheral area houses farms and hatcheries as well as a modern garbage collection and waste conversion centre. A production base and manufacturing factory is located in the upper part of the triangle plot, whilst a tidal power generation device is located in the lower part. These facilities are the basis of a sustainable food and energy supply chain.
   
    The Floating City will provide world class facilities, as well as additional supplies of new areas to satisfy the long-term demand for human habitable land. Noise, waste and other environmental impacts will be managed via innovative strategies. Our proposed development and the associated infrastructure will bring positive change to the community and its economy. The design will meet long‐term infrastructure and sustainable development needs but also bringing new opportunities to education, recreation, employment and business activities. Such opportunities will create a vibrant, diverse and sustainable social and economic platform.